On the 9th of July 1944, the 24 Lancers received a request from the 4th Lincolnshire Regiment to destroy a house which they believed was being used by the Germans as an observation post for their mortars.

The 24 Lancers were an Armoured Cavalry Regiment which landed on Gold Beach in Normandy on June 7th 1944. The Regiment was equipt with Sherman tanks including the Sherman Firefly.

The Lincolnshire Regiment did not want the tank to fire from within their positions presumably so as to not draw enemy fire onto their positions. So it was decided to engage the house with indirect fire.

The house was located at 871649 about halfway between the villages of Vendes and Brettenvillette in a fairly isolated area, surrounded on three sides by fields with high hedgerows and an orchard to the east. Aerial imagery of houses location from 1947 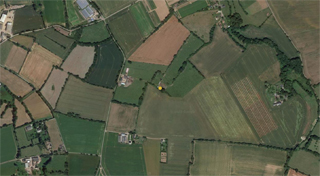 One tank from A Squadron was positioned at 876696, a field about 700 meters south of Cristot. At a range of 5,200 yards, it was not possible to view the house from this position so a scout car with wireless was sent to act as an observation post. 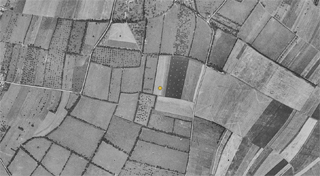 Aerial imagery of tanks location from 1947

Although the trees have been cleared the boundary of the orchard remains unchanged and IGN imagery from 1947 gives a good indication of how the area would have appeared at the time.

The scout car was positioned at 881656 in an orchard to the northeast, which was the only place on the flank where it was possible to view the house. Although even from there only half of the house could be seen due to it being surrounded by trees. 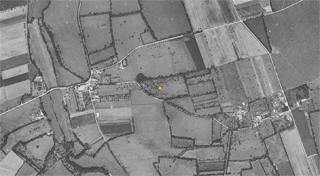 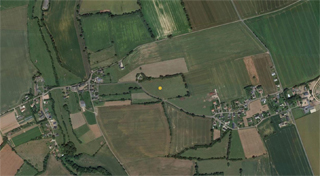 The location of the house and scout car relative to the tank is shown on the map below.

The tank then started firing at the house receiving corrections from the scout car. The house was hit on the thirteenth shot. A large number of 75mm HE Super shells with delayed fuses were fired at the house, entering through the roof, bursting inside, and eventually setting the house on fire.

Approximately 100 rounds were fired at the house of which about 50% burst in the trees around the target.

Despite the difficulties of this shoot, the commander of 146 Brigade expressed his complete satisfaction with the result of the one-tank shoot.

The isolated house destroyed by the tank of the 24 Lancers no longer seems to be present with the surrounding orchard turned to farmland. Although many of the surrounding hedgerows are still present today.

Several weeks after this action the 24 Lancers Regiment was informed it would be disbanded due to heavy casualties and lack of reinforcements, with it being disbanded in early August.