This monument was unveiled by
General Sir George Cooper GCB MC
On the occasion of the granting of the freedom
of Lion-sur-Mer to the Corps of Royal Engineers
on 10 June 1989. 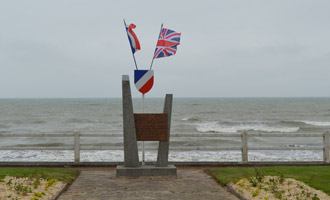 A memorial to the allied and civilian victims of Lion-sur-Mer.