When Denmark was invaded and occupied by German forces on the 9th April 1940 thousands of Danish sailors and many Danish ships were cut off from their home ports.

Many of these ships and sailors headed to Allied ports and entered service with the Allies. More than 30 Danish ships and over 800 Danish sailors where involved in the Normandy landings with at least 24 sailing under the Danish flag. 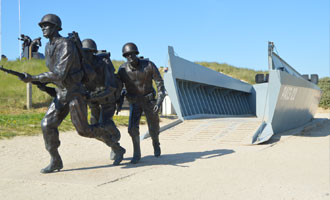