The Richard D. Winters Leadership monument is dedicated to the memory of all junior U.S. military officers who served on D-Day.

The monument is a 12ft-tall statue of Winters who inspired the book and award winning television series Band of Brothers. The monument is located on the D913 between Sainte-Marie-du-Mont and Utah beach.

Major Richard D. Winters
1918 - 2011
Dedicated on June 6, 2012 by the World
War II Foundation, along with our French
allies from the Utah Beach Museum and
with the support of the grateful citizens
of the village of Sainte-Marie-du-Mont

In honor of Dick Winters and all those
American junior officers who led the way
on D-Day, June 6, 1944.

May we never forget
their leadership under fire 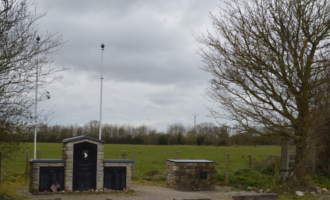 A monument to the 101st Airborne Division 506th P.I.R. "Easy" Company. Located near Brecourt Manor where they took out 4 guns aimed at Utah Beach as depicted in the Band of Brothers series. 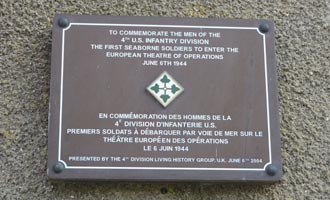 A plaque to the 4th U.S. Infantry Division located in Sainte-Marie-du-Mont A Memorial to the 101st American Airborne Division who liberated Sainte-Marie-du-Mont on the 6th June 1944.