The battery is located between Omaha and Gold beach which made it a threat to the Allied landings. Because of this, the area was heavily bombed on the night before D-Day. This was followed by a naval bombardment in the morning. Although the bombing did not cause much damage to the guns it did destroy the phone line linking the fire control bunker to the guns which severely disrupted the batteries ability to engage with the Allied ships that eventually knocked the guns out of action during a duel in which no Allied ship was damaged despite the battery firing 170 rounds. On the 7th of June the major responsible for the battery surrendered to the British with 184 men.

The site of the battery is open to the public all year round including access inside the concrete casemates still housing their original guns and inside the fire control bunker which was featured in the film the Longest Day. The site has a tourist information centre and a hut that serves food and drink although the opening times for these may be seasonal.

Open to the public all year 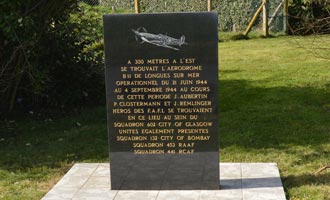 A monument to the advanced landing ground B-11 set up 300 meters to the East of the battery which became operational on the 26th June 1944.

A memorial to the 47th Royal Marine Commando located on the D514 entering Port-en-Bessin-Huppain. A small bunker in the harbour of Port en Bessin, the bunker has a plaque on it to the 47th Royal Marine Commando and the sailors of two French light cruisers Georges Leygues and Montcalm.