The Memorial de Montormel is located on the site of the battle of the Falaise Pocket between Chambois and Vimoutier and commemorates the sacrifice of the Polish soldiers who lost their lives in the battle. Attached to the wall of the monument there is a metal plaque symbolising an exploding artillery shell that splits into four points, each symbolising an allied unit that fought in the battle, 1st Polish, 2nd French, 90th American and 4th Canadian.

The museums information is presented in English, French, German and Polish. Chambois Memorial to the closing of the Falaise pocket 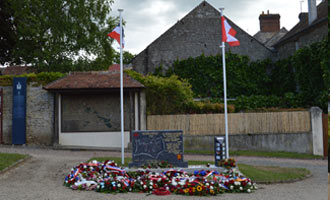