The Airborne Museum is located in Sainte-Mere-Eglise and is dedicated to the American paratroopers of the 82nd and 101st Airborne Division who were dropped into Normandy and fought as part of Operation Overlord.

The museum contains a collection of over 4500 items from the second world war with a particular focus on items used by the paratroopers who fought during the battle of Normandy and the equipment used by the German Occupiers. There is a powerful and informative film (lasts 25 minutes) about the preparation for and liberation of Sainte-Mere-Eglise. Some of the museums highlights are its Waco Glider and a Douglas C47 plane Argonia and more than 100 uniformed mannequins showcasing American and German uniforms and equipment.

Note: The museum is located opposite the church in Saint-Mere-Eglise where American paratrooper John Steele hung from the tower by his parachute before being taken prisoner by the Germans. A dummy now hangs from the tower as a monument to him.

May to August
9am to 7pm 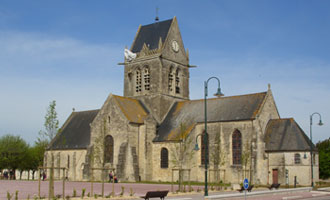 A memorial to Alexandre Renaud, the former major of Saint-Mere-Eglise when the Allies landed in WW2.

A monument to the liberation of Sainte-Mère-Eglise by the 82nd and 101st Divisions.