The Normandy American Cemetery covers 172.5 acres and is situated on the cliffs overlooking Omaha Beach east of St-Laurent-sur-Mer it is a cemetery and memorial to American Soldiers who died in Europe during the Second World War.

The cemetery contains the remains of 9,387 Americans, most of whom were killed during the Normandy Landings and the following military operations.

The memorial contains the names of 1,557 Americans who lost their lives during the Normandy campaign but could not be located or identified on the Walls of the Missing a semicircular colonnade to the east side of the memorial. At the centre of the colonnade stands The Spirit of American Youth Rising from the Waves, a 22 foot tall bronze statue. In front of the statue and colonnade is the reflecting pool.

The cemetery and memorial is open to the public most of the year and there are members of staff on duty in the visitors centre to answer questions and escort relatives to graves and memorial sites.

The cemetery is open daily from 9am to 5pm except December 25 and January 1.

A memorial to the officers and men of the first US infantry division who were killed fighting for the liberation of the world. 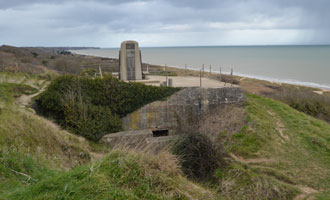 The memorial to the Fifth Engineer Special Brigade is located on top of a casemate at WN60. WN65 is a concrete casemate which housed a 50mm anti-tank cannon which is still present today, it became the first American Headquarters on Omaha Beach after it was captured on D-Day