The museums exhibitions include The German Defences, The Cotentin Under Occupation, The Allied Strategy, June 6 1944: D-Day at Utah Beach, The Link-up, From Utah Beach to Cherbourg and The Port at Utah Beach. Located in a custom built aviation hanger the museum houses an original B26 bomber, one of only six examples of this aircraft worldwide. 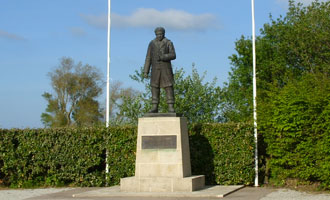