A Sexton self-propelled gun in memory of Major Robert Kiln and the British troops who landed on the beach at Ver-sur-Mer. The Sexton was presented by his son Dr Matthew Kiln.

The Sexton had a 25-pdr gun with a range of 12,200 meters and was intended for indirect fire support directed by forward observers, although if required could engage visible targets directly.

The site also has a Porpoise Ammunition Carrier which was a sledge towed behind tanks to carry extra ammunition for the landings. These were used as planners were concerned that tanks could run out of ammunition before additional supplies could be brought ashore. 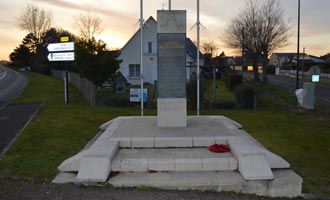 A memorial to the Headquarters and Regiments of the Royal Artillery who landed on the beaches of Ver-sur-Mer and fought for the liberation of Normandy. A memorial to the 2nd Battalion of the Hertfordshire Regiment who stayed here until the 31 August 1944 during the battle for Normandy.

This casemate is located on Gold Beach in King Red Sector in Ver-sur-Mer and was part of WN33.